thanks to francesca db, our super-talented, amazing mummy of a photographer. we’ll be back for more, i’m sure.

my mother (s’s gram) thought it might be a good idea for us to document various adventures taken on p’s day off. usually the poor guy is so strung out by monday that we just have to get out of town, resulting in cool experiences that we wouldn’t have had otherwise.

(note: mondays with the vicar isn’t necessarily an accurate title, since p isn’t actually a ‘vicar’ per se…but since everyone in this country thinks every ordained person is a vicar, that’s how we tend to describe him. he hates it.)

today was BEAUTIFUL, so we decided to get the f out of cambridge and enjoy the sun.

the plan was to get up and out early, but my snoring husband had other ideas. 😉 by the time we were up and at em, most of the morning was over. we decided on anglesey abbey, a local country house and estate about fifteen minutes down the road. s is such a good little passenger in the car now…at first i was too scared and paranoid to leave her in the back seat alone, but now she only screams if she spits her dummy out and even then can usually suck her fingers until she’s happy again.

last week we decided to drive an hour down the a14 to bury st edmunds and forgot the carseat adaptors for the stroller (which resulted in a huge fight and an unnecessary purchase of a cheap baby carrier, since no one sells icandy accessories ANYWHERE). this time, we vowed to be more prepared. we brought every single possible mode of transport we could think of and shoved it all into the car. s was a happy baby in her bassinet at the gardens and stayed out of the sun the whole time since i freak out if a single ray of sunshine touches her body for half a second. 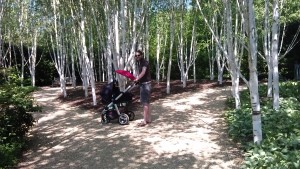 i overcame my irrational fear and we let her out for a few minutes when we were eating lunch so she could look up at the trees. her face was a picture; i wish i had taken one! she gawked for a full five minutes before getting bored, and i consider that a huge success. i fed her while we sat in the shade, watching the planes taking off from cambridge airport. 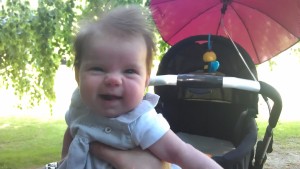 getting braver with the bebe au lait nursing cover!

after the abbey, we came back into town to mooch. mooching is a favorite pasttime of our family, and usually results in the buying of tons of crap we don’t need. today wasn’t an exception…we came home with a basket for s’s growing collection of toys, a fan (it’s still freaking hot), and a george foreman grill. but not before a stop at starbucks, my new favorite nursing spot. usually the comfy chairs are occupied by businessmen who haven’t purchased anything in the last three hours, so we sit at the table next to them and give them the stinkeye until they feel pressured to move. it didn’t work today. oh well…it gave me a chance to practice some more public nursing, something that still stresses me out. i’m just waiting for someone to come up to me and tell me how inappropriate it is so i can fly off the handle at them. man, i have too much pent up rage. i need a hobby.

p’s day off usually ends in the best way: relaxing on the sofa with bad tv and each other.

capturing the elusive smile from s is like hunting bigfoot. for awhile, p and i thought it wasn’t going to happen. sure, she’d smile for us in the morning, after feeds, and when p made ridiculous faces at her. as soon as i stuck the camera in her face, however, i got nothing.

so in the mornings i’ve taken to whipping it out every other second. poor s; the paparazzi has descended. these are the versions of the baby smile most likely to appear:

although each of these smiles is more adorable than the last, none of them lives up to its full potential. what we are hunting is THE BIG ONE. a smile so adorable that the heart melts instantly. a truly happy smile. so far, we’ve only caught one of these smiles on film.

good enough for me! ❤